The first patch of the Winter update, MapleStory Unlimited, has been released! This patch includes many reorganizations, including those to items, stats, and bosses! It’s almost like another Big Bang! Read on for more information~

Here are the two world selection screens for those interested, haha.

First up are all the item reorganizations. The drop rate of all equipment has been increased from 5 to 10 times its regular rate, permanently! In addition, dropped equipment now has a greater chance to be a rank higher than Rare~

The price of equipment in shops as well as the price to repair durability have been decreased.

The tooltips shown when hovering over equipment items have been reorganized! Along with a sleek new look, the tooltips show much more useful information now. Potential outlines are now only around the picture (I think it looks much better!). Also, base stats of the equipment will appear in white and scrolled stats will appear in orange with a + sign beside it. (e.g. if you scroll something for attack, you will see attack: 100 + 50). These bonus orange stats also include stats that cause an item to be above average.

First off, the large white numbers on the top indicate how much the item will affect your range if you equip it. The stat highlighted in purple is defense, then the green is magic defense, the red is boss damage, and the blue is monsters’ defense ignored.

Items have become more powerful! Equipment from drops, blacksmithing, and shops will have a chance to come with Additional Options! These additional stats will appear as orange text beside the regular stats of the item (Note: this means that Additional Options, above average stats, and scrolled stats will all be combined into one number).

You can receive 1 to 4 Options per item and there are five ranks of Additional Options, each with better stats. Certain boss items will always receive 4 Options, and have a greater chance of getting higher ranked stats. Items that drop may also vary in required level.

Only weapons, armor, accessories, and pocket items can have Additional Options. This does not include secondary weapons and shields, rings, or medals.

If you’re lucky, you’ll also receive the extra Additional Options that are possible to get (% total damage, % all stats, % boss damage, and reduction in required level). These will appear in bolded white text.

The Dragon weapons (level 110) will now drop from monsters. Also, equipment drops have been normalized through all monsters based on level (that means that monsters will drop any equipment near their level, not specific equipment only).

However, when you use a Flame on an item, it will become untradeable and receive a Scissor count of 5. This means that you can use a maximum of 5 Karma Scissors (Platinum if the item requires it) before it becomes completely untradeable.

For items that were initially untradeable, you will need to use the new Silver Karma Scissors. They are available through in-game means, you do not need to buy them from the Cash Shop~

The maximum avoid rate has been decreased to 90%, you cannot dodge every single attack anymore.

The ignoring monsters’ defense stat and how it stacks has been changed.

Magnifying glasses have been reorganized! You no longer have to buy them from a store, simply use the icon in your inventory and pay a fee to instantly identify your items~

Of course if your Insight level is high enough, you won’t have to pay a thing.

The character creation screen has been reorganized! There is now a scroll bar at the bottom for all the jobs, and you’ll see a summary for each class on the left~

As a bonus event, until January 31, you’ll be able to create any of the 14 jobs in MapleStory~!

You can now have up to 3 Card decks! However, you can only use one job card in your entire deck. 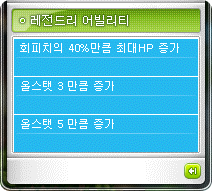 Inner Abilities have been reorganized! They are now called Ability, and each line is automatically unlocked when you reach level 30, 50, and 70 (these are your actual levels, not Honor levels!). The ranking system has been changed from C, B, A, S to Rare, Epic, Unique, and Legendary.

All the Circulators have been combined into a single Ability Circulator which you can buy from Aswan or get from bosses. When you gain a certain amount of Honor experience, you will receive free Circulators.

The Honor system has been reorganized! Monsters can now drop the Medal of Honor, which gives 100 to 1000 Honor when used! Boss monsters will drop them at a more frequent rate than regular monsters. In addition, each difficulty in Aswan will now give the same amount of Honor experience.

Boss monsters have been reorganized! Their rewards have been strengthened and their balancing has been adjusted. The new bosses will definitely pose a challenge to even veteran Maplers! By the way, in the following list, when I say ‘the characteristics of their attacks have been changed’, it means that most of their attacks do fixed % damage now.

Rewards from boss monsters are now automatically distributed to those who helped fight them, and you cannot loot an item that has been assigned to someone else.

Bosses now drop the Strange Cube, an item which resets the potential on a Rare or Epic item. Be careful, it can reduce your rank from Epic to Rare! They’re tradeable too~

As mentioned before, bosses will drop equipment items with Additional Options more frequently (which may come with a Scissor count), and the Flame of Reincarnation. They will also drop the Ability Circulator, which is used with the reorganized Abilities.

Until February 28, you’ll be able to enjoy the new Maple Mentoring system! Pair up with someone less experienced than you to gain special benefits! If you two hunt in the same map, you’ll receive 20% bonus experience and 30 attack and magic attack. You can also teleport to your mentor or mentee once every 30 minutes!

You can also complete special missions to receive gift boxes~


Hyper Skills have also been adjusted based on the new damage cap.

The first event is the Spin the Wheel event, which runs until January 3!

You can find the Wheel NPC in most towns. Basically, you have to collect Wheel Tickets from monsters around your level, and trade them in to spin the wheel~

Based on how many tickets you trade in, you’ll spin a different wheel (10 for the top left, 20 for bottom left, 30 for top right, 40 for bottom right). The colour you land on determines the gift box that you receive~

The prizes get (arguably) better as you go to the right on this list. Since there’s so many, you can just look at them here (they’re in the same order as above). As you can see, they give potions, scrolls, a variety of chairs, and even Ultimate equipment.

The next is the Winter Achievement event, season 1! It runs until January 2.

There are 6 achievements, each based off a different event for this winter! For example, the first one wants you to participate in Spin the Wheel 10 times~

For each one you complete, you’ll receive a 3 attack and magic attack title that lasts 10 days and a Winter Achievement Box, which can give you a Winter Limit Coin, various scrolls, or a Giant Yeti Chair.

If you can complete all 6 achievements, you’ll receive the Glorious Winter medal, which gives 8 attack and magic attack. However, it’s time limited and lasts 30 days.

The Maple Winter event will run until January 30~

Like every year, monsters will be dropping Snowboards! They’ll also be dropping the Snow Winter Box, which you can open for prizes~

Everyone will receive 2 2x Experience and 2x Drop coupons each day of this event. You’ll also receive a Maple Teleport Rock!

You can spend your Winter Limit Coins at the Winter Limited Coin Shop, hosted by the Tempest event’s Wind and Spark~ Spark sells the new Frosty equipment, level 80 weapons and armor.

The last event is the Winter Attendance Check event.

It will take place over 4 Seasons, each two weeks long, from now until January 30.

For Season 1, you’ll receive a Premium Dice for the first 6 days of the week, 6 Premium Dice and a Strange Cube on the 7th day of each week, and a Character Slot Coupon if you complete all 14 days!

Premium Dice can be opened to receive use items, scrolls, Mysterious Scrolls, and Surprise Chair Boxes.